The sun was shining and I was on my way to see a new show about the Impressionists at the Royal Academy, London and that surely is the start of a good day

The Royal Academy has reopened and as part of their new Covid19 safety procedures, entry is through the less familiar Burlington Gardens doors rather than the main courtyard but it’s still a grand entrance: 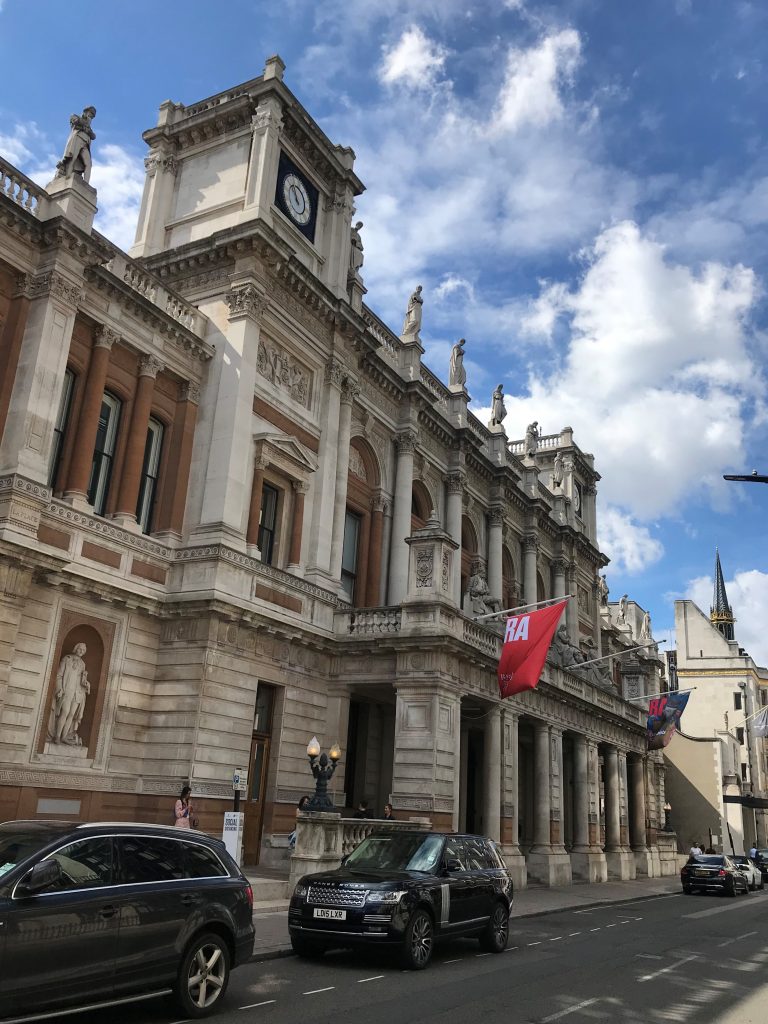 The Royal Academy is known for its special exhibitions although it does have a permanent collection which opened as part of the redevelopment and expansion of the RA in 2018.   Their new exhibition is Gauguin and the Impressionists which is work from the Ordrupgaard Collection in Denmark.

The story behind this collection, which I’d never heard before, of is a Danish couple the Hansens who started collecting French art after business to Wilhelm to Paris and he was captived by what he saw.  The First World War led to a fall in prices of this art and as Denmark remained neutral, he was able to make significant purchases.  His aim was to build a collection that traced the artistic development from Corot in the mid 1800s to Delacroix and Courbet through the  great Impressionist masters to painters such as Gauguin.

Disaster struck in 1922 as Denmark’s largest bank went bust and so did Wilhelm.  He had to sell and offered his collection to the Danish state but they refused!  He sold up to half of his collection and managed to get solvent again and able to buy new works.  On his death he left his estate to his wife Henny who in turn left it to the state on her death, this time they accepted it!  Here they are relaxing before this story started: 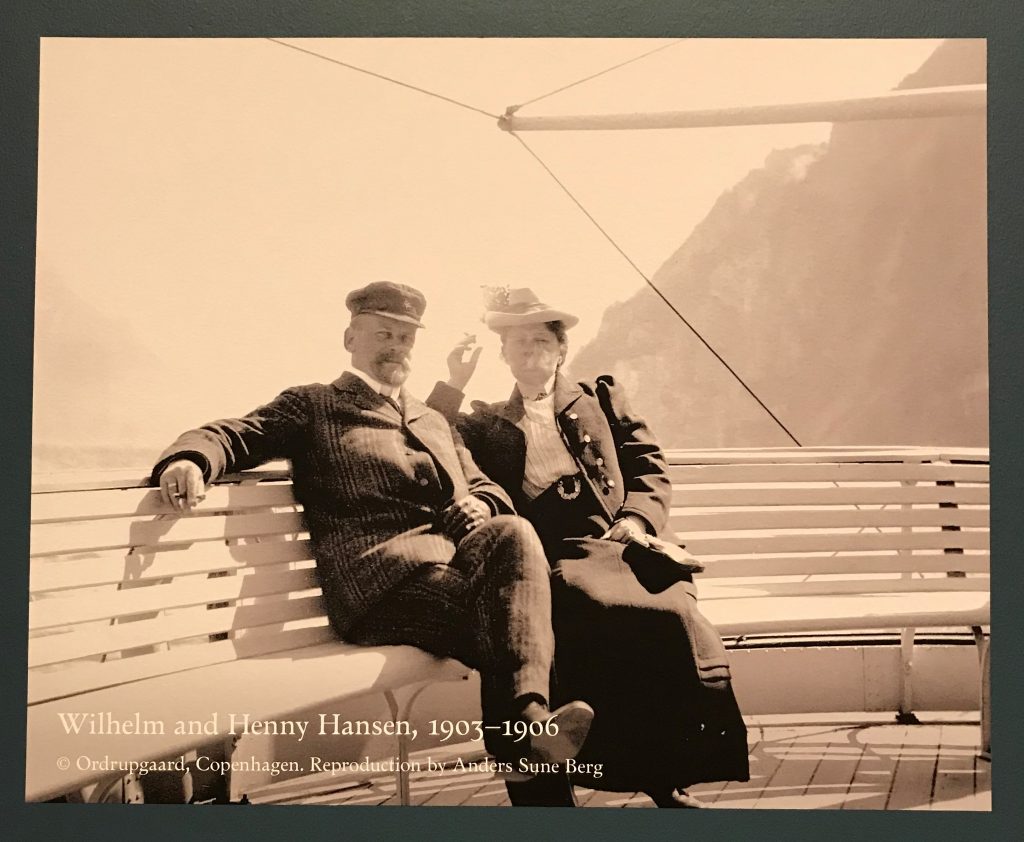 The exhibition at the Royal Academy is made possible because the buildiing housing the Collection is being refurbished so we have the chance to see many paintings which have not been seen in the UK before. There are 3 rooms to explore and I was stunned to see the first wall was full of Pisarros, one of my favourite impressionsists. 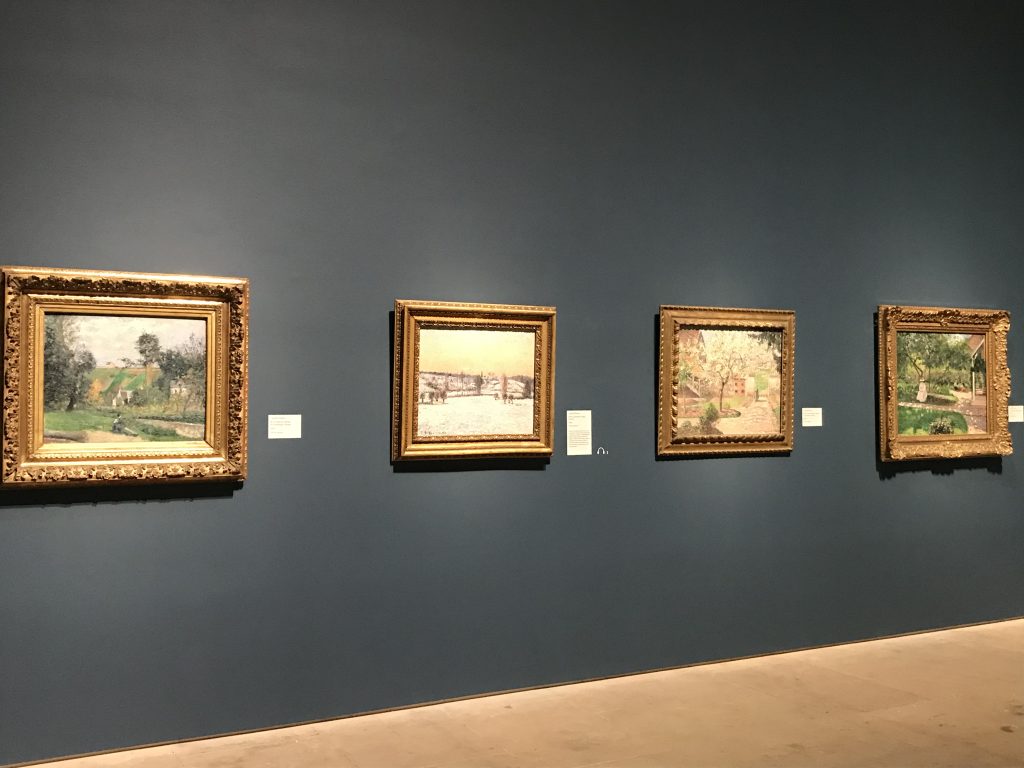 Pisarro’s use of light is wonderful and this example of a snowy landscape painted in 1894 uses a range of colours to illuminate the whiteness of snow.

Turn to your right and there is a wall of Sisleys! 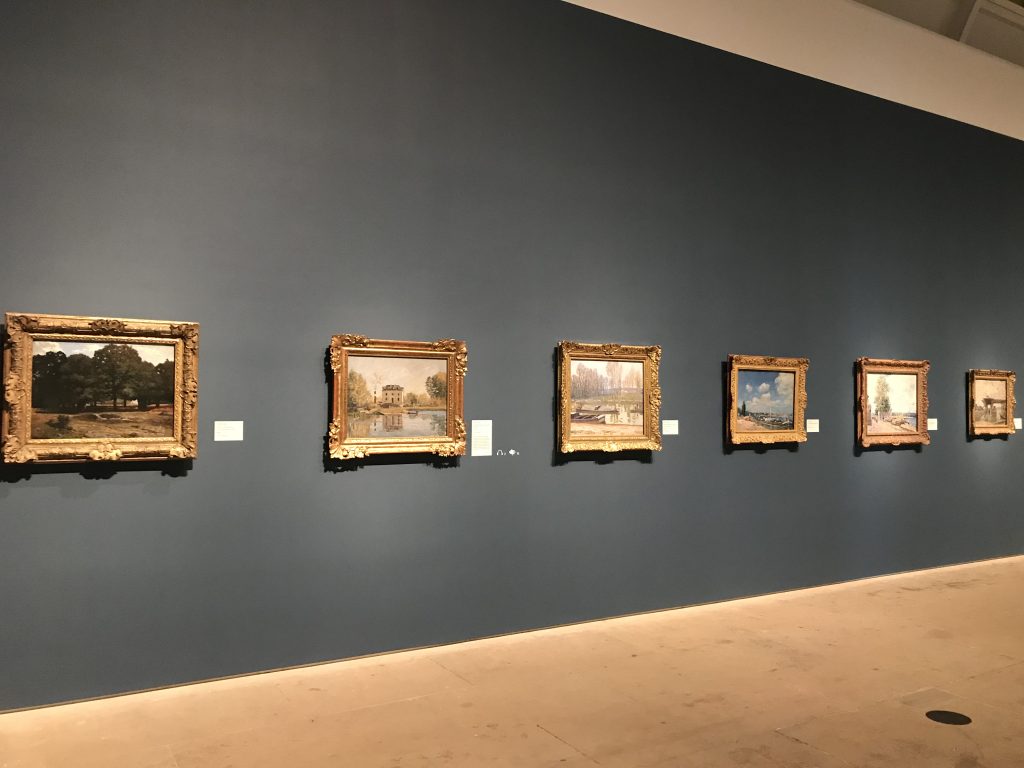 As you walk around this first room, brilliant pieces leap out at you and the combination of Money and London is always a winner for me. Here’s Waterloo Bridge, Overxast painted in 1903 from his room in the Savoy Hotel which was a frequently used vantage point for his London painting.  He was captived by the London fog , writing about it to his wife calling this ‘an extraordinary fog, completely yellow’. These days we simply think of the pollution that caused it but to Monet it wa something special. 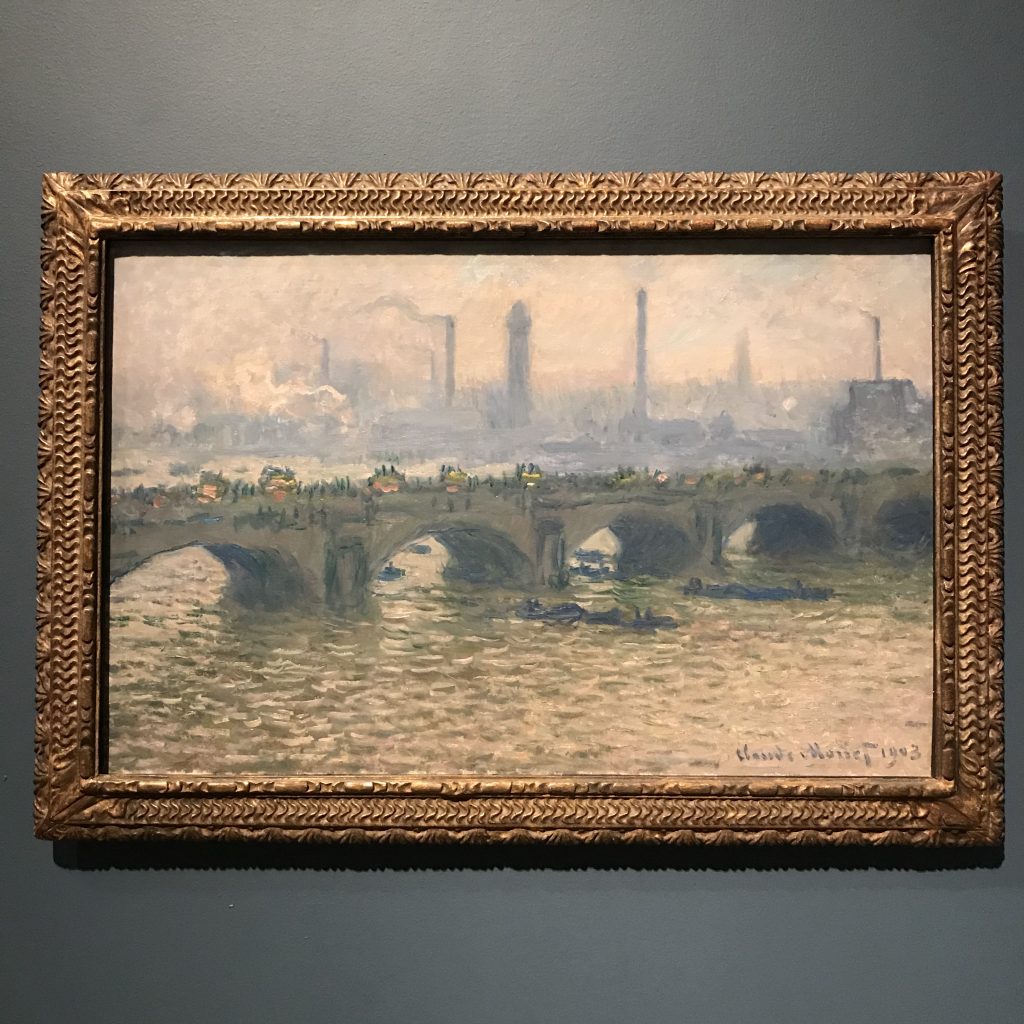 The middle room has more traditional works and the gallery attempts to recreate Hansen’s own dense hang of a wall of pictures.  The photo was taken around 1918 in the Ordrupgaard Collection shows his love of symmetry and stacked pictures. The recreation is only partial due to the forced sale of some of the works on the original wall. 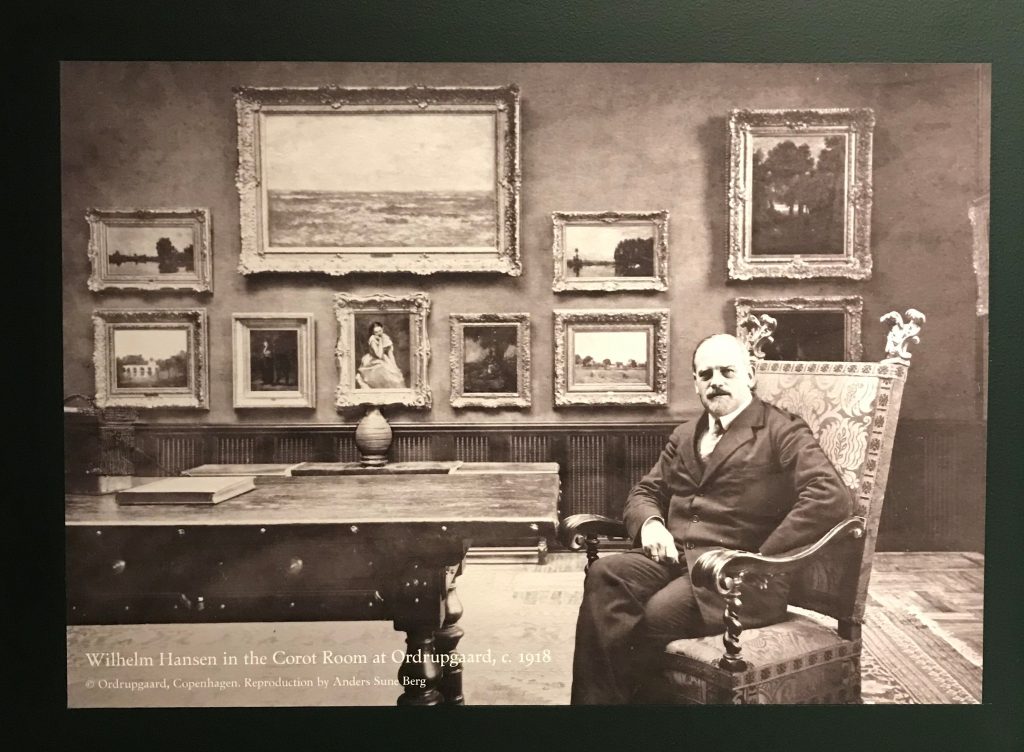 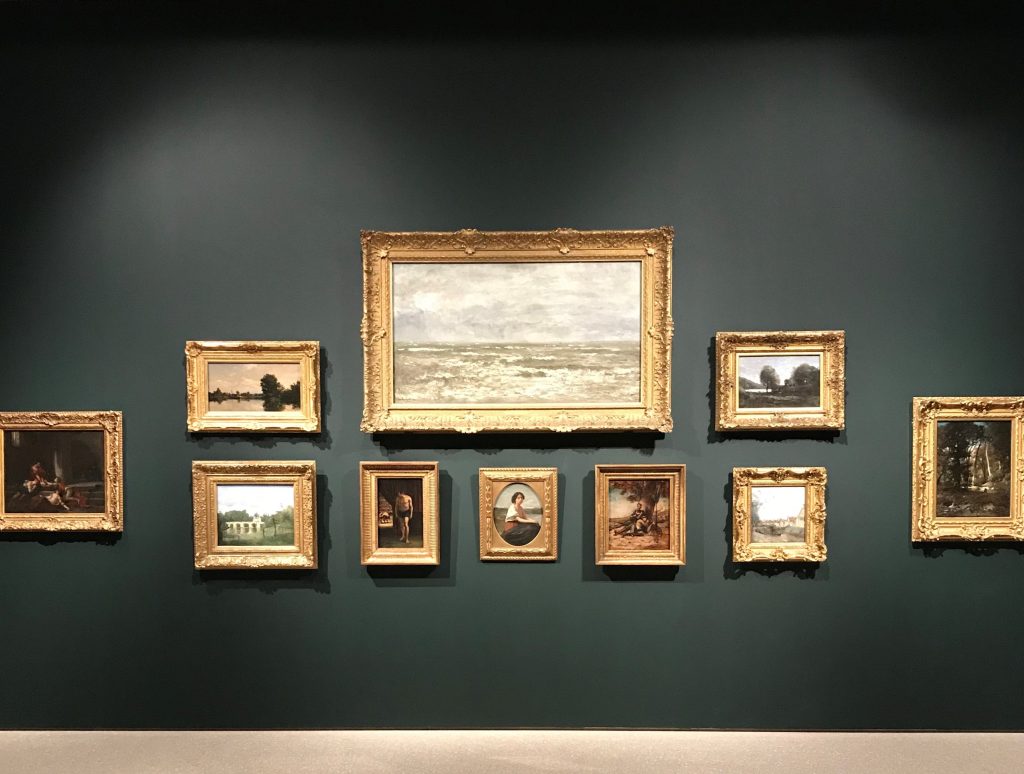 As you enter the third room, I was pleased to see women Impressionists given a mention on a wall placard and this fine picture by Berthe Morisot given a prominent positions. 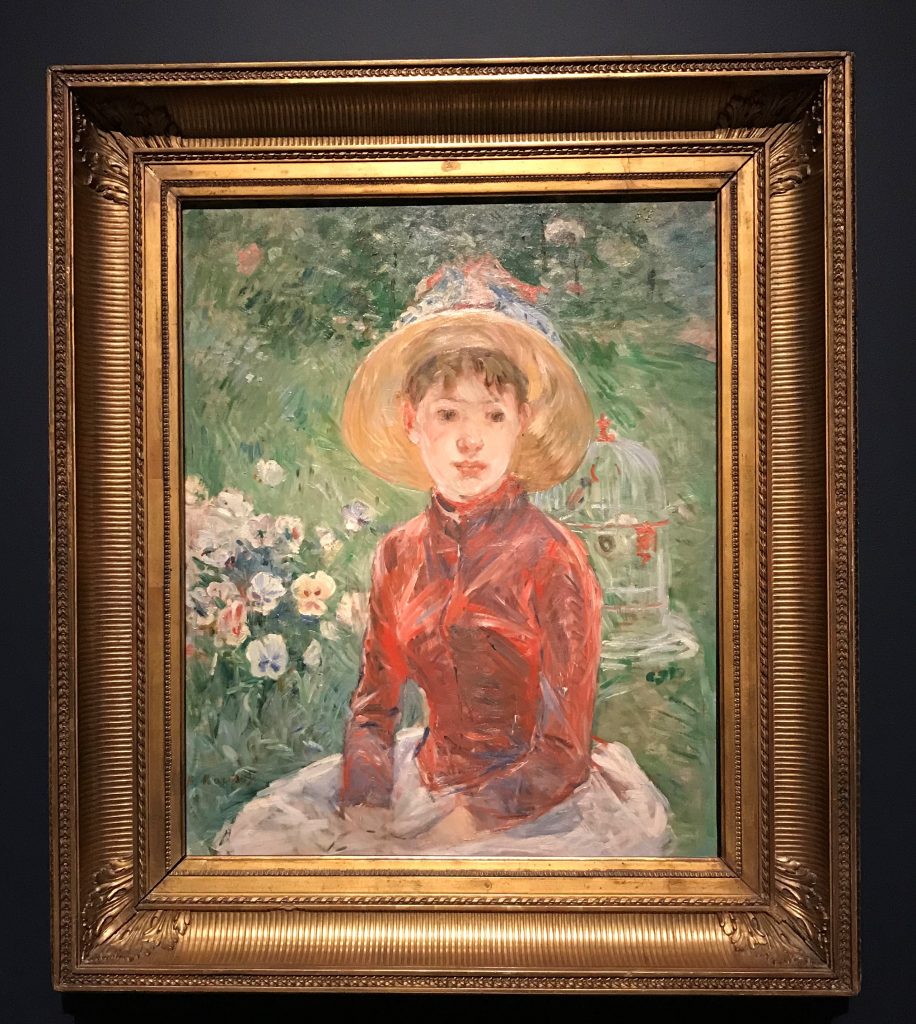 The far section of room 3 houses the Gauguin paintings.  He is a troublesome painter due to his views of Tahiti, it people and in particular women and although he was not alone in having such views, they do tip into his work which I find problematic.  This piece entitled Tahitian Woman shows his great use of colour and form and show us his idealised view of what he wanted to be an untouched primitive society.   However, Gauguin was one of Hansen’s favourite artists and is one of the best represented in his collection. 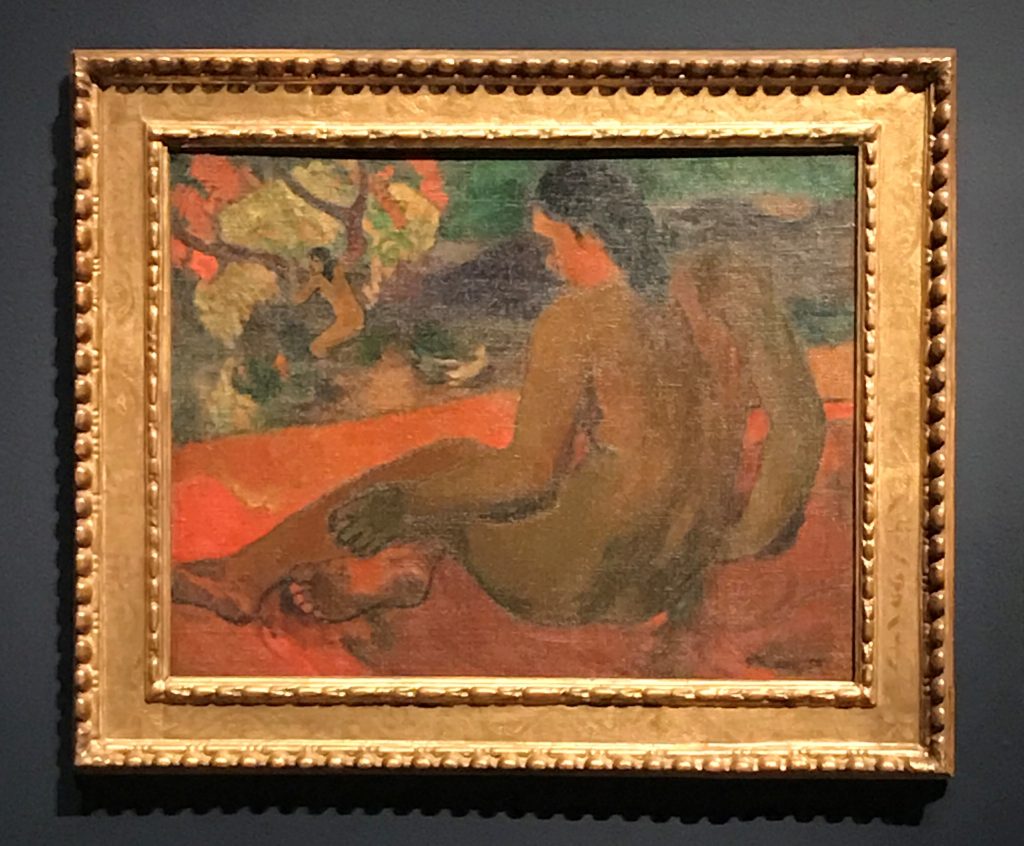 There should be a place in my selection for a painting which did not catch my eye but was a favourite of Hansen himelf which it is said he showed to his dinner guests as ‘an extra dessert after ice cream!   It’s  Manet’s A Basket of Pears painted in  1882. 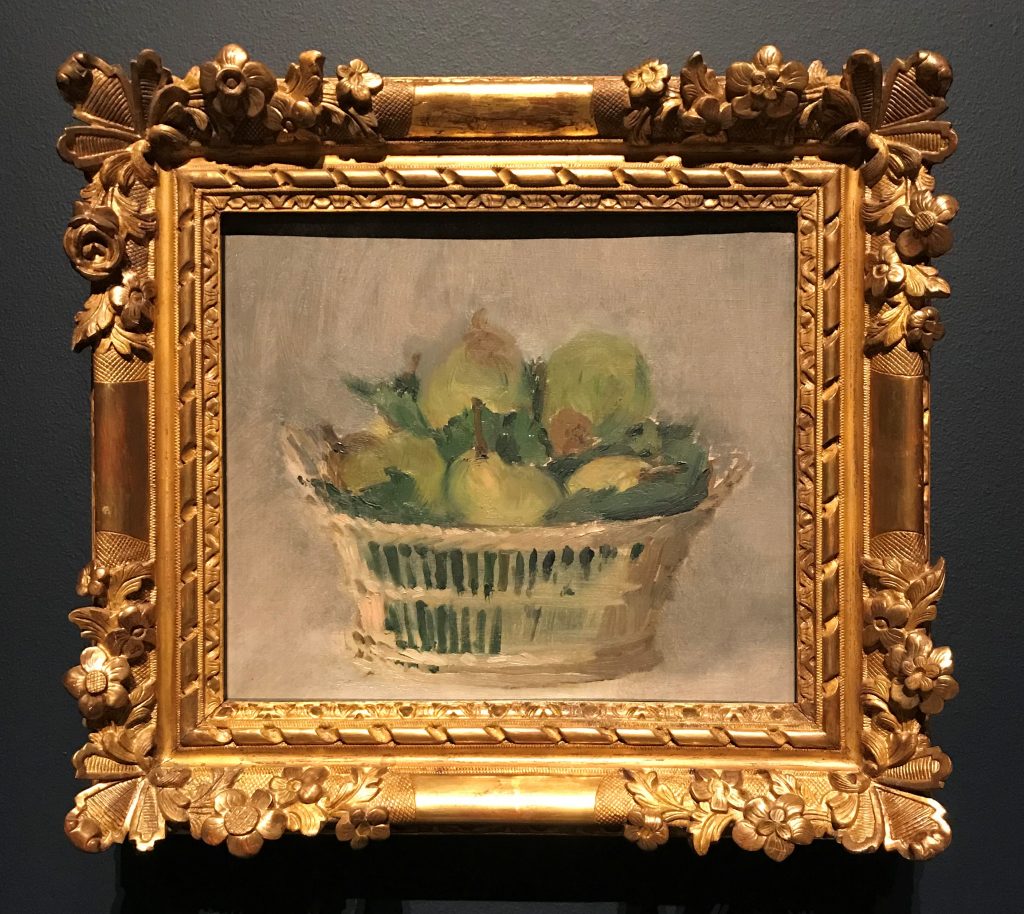 Other notable artists have work in this collection such as Courbet, Delacroix, Ingres, Renoir and Matisse. It’s a small exhibition packed full a great art and I can’t finish without adding a Degas. This piece fro 1894 is entitled ‘Woman arranging her hair’: 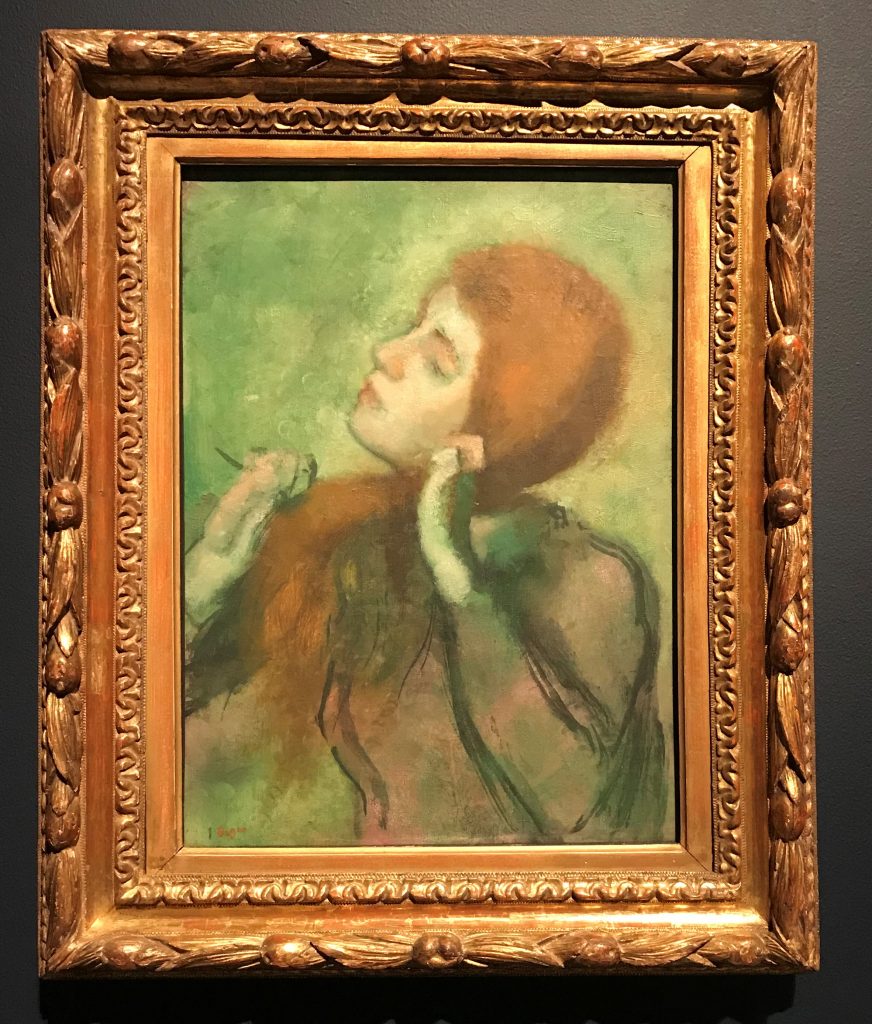 This exhibition is a rare opportunity to see this fine collection outside of Denmark and enjoy new works by many favourite artists.

Find out everything you need to know about booking tickets, opening hours, cost of special exhibitions and safety procedures at their website https://www.royalacademy.org.uk/

Full disclosure: I was invited by the Royal Academy to review this exhibition as is customary in the tourism world.  This has not influenced my view.