Thomas Becket, what’s the story and why does he deserve his own exhibition at the British Museum?  It’s quite a story!

Born around 1120, Thomas’s parents were quite well connected and he got a good education but his father fell on harder times so Thomas got a job as a clerk and then found a position working for the Archbishop of Canterbury.  He travelled on church business, met the right people and did so well that he was recommended to the post of Lord Chancellor! He and the King, Henry ll  became close and Thomas was good at his job which included collecting revenue from landowners such as churches and bishoprics.

His next job was as Archbishop of Canterbury, the most senior religious role in the country, despite having never been a priest and this is when everything changed. Thomas’s first allegiance was now to the church not the king and Henry had assumed Thomas would continue as Chancellor and help him get more control over the church but he resigned as Chancellor right away.  Disputes between the church and state increased and Henry and Thomas’s relationship worsened. In 1164 Thomas was accused of contempt of the king’s authority and was found guilty so he fled to Europe.

A compromise was found, Thomas returned but infuriated by the acts of 3 Archbishops and Bishops who took on a role reserved for the Archbishop of Canterbury alone he excommunicated them.  Henry took a dim view of this and 4 knights were dispatched to Canterbury to arrest Thomas. Things got out of hand when Thomas refused to go with them, he fled to the cathedral and in the ensuing melee, Thomas was killed in this holy site on 29th December, 1170.

This story of the murder spread like shock waves throughout Europe, Thomas was seen as a martyr, then he was made a Saint in record time,  the  king had to make public penance at the tomb and Canterbury cathedral became a key pilgrimage site for centuries to come.  His cult was strong during the middle ages and people all over Europe revered him.

Now you’ve got the story, what about the exhibition?  This takes us through his life chronologically with artifacts, letter, books, and of course the famous Miracle Windows – more on these later.  The items really grab the visitor are those associated with his later life but story told leading up to this is well worth following and enjoying through books, seals and ??

The murder itself is at the heart of the exhibition and with eye witness accounts, the event is well documented.   Accounts from the time also describe miracles which occurred around the tomb almost immediately after his death.

In 1173 the Pope made Thomas Becket a saint and many beautiful caskets were made in France to hold his relics . About 50 of these remain, scattered across Europe where his cult spread. This example is one  of the largest and earliest, made within 20 years of his death. 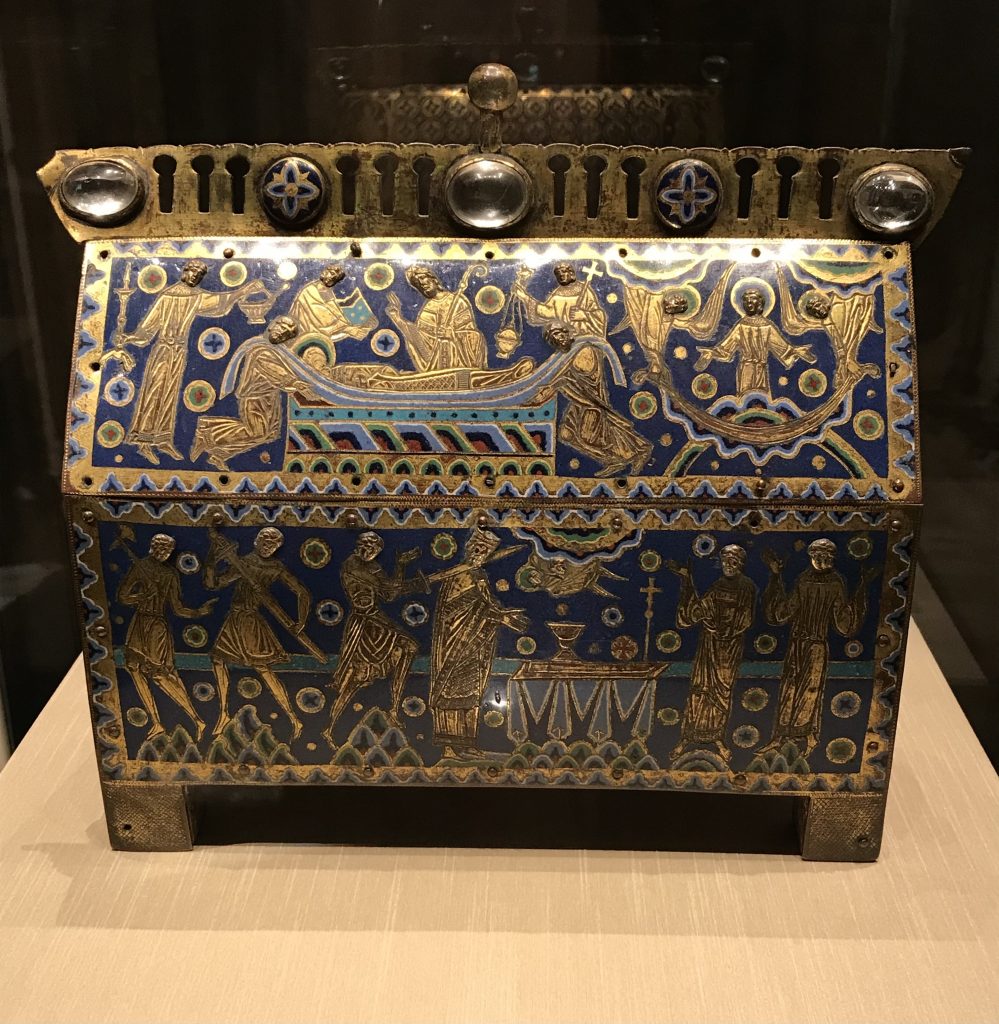 I’ve mentioned how the cult of St Thomas spread through out Europe and one of the more striking examples is this golden reliquary from Norway dating from 1220-1250 with 2 extraordinary dragons’ heads marking out from the French designs. The bottom panel shows the moment the fatal blow is struck. 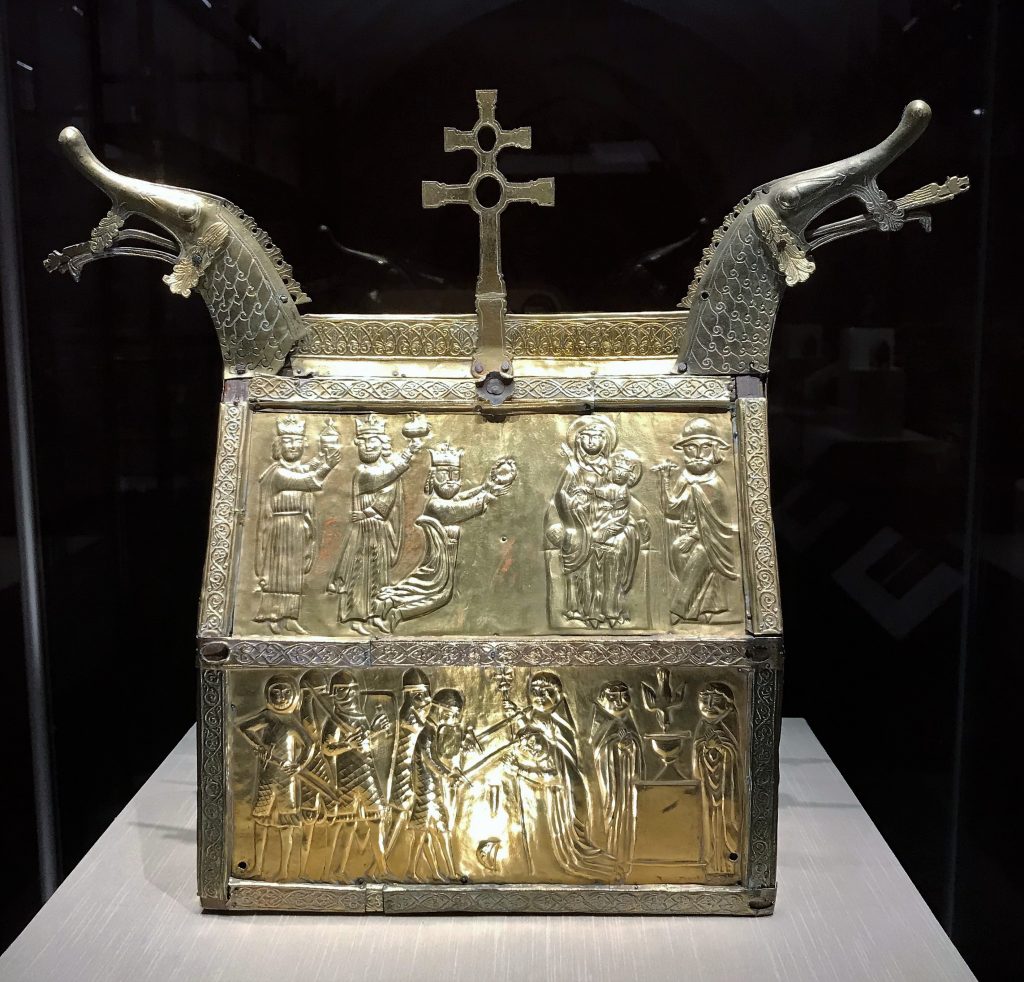 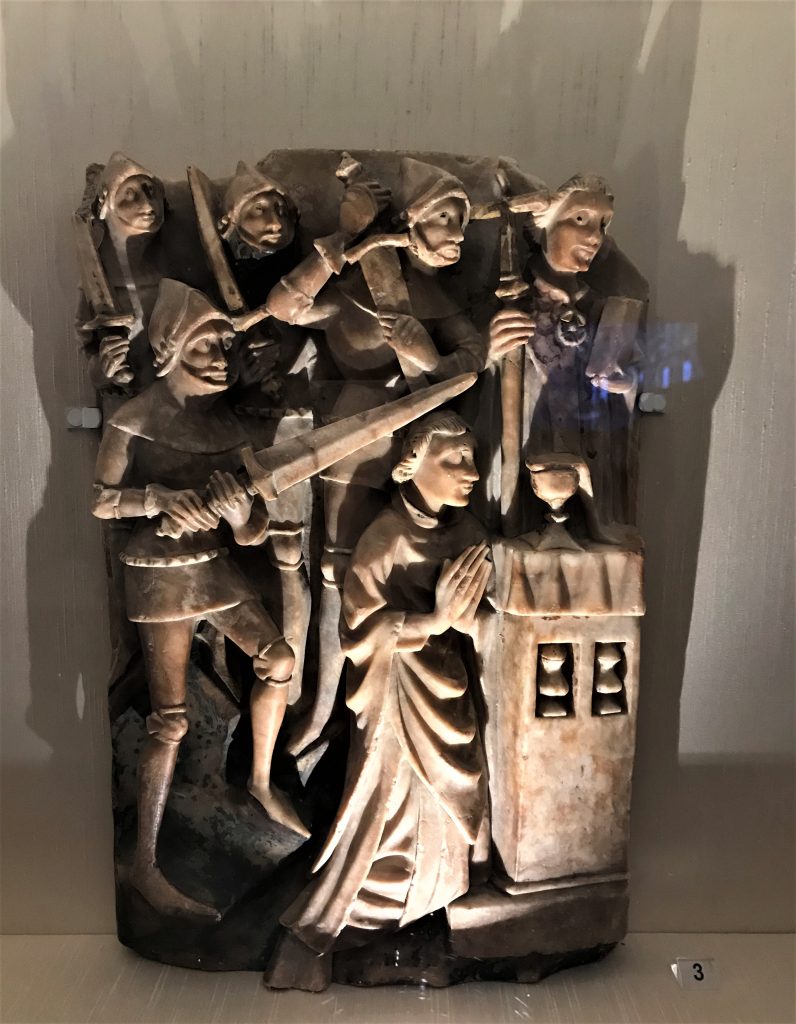 Henry ll had not foreseen that the death of Thomas would result in his martyrdom and then sainthood and there are conflicting accounts of whether he did want Thomas dead or just to curb his powers.  It is clear that Henry made public penance, even walking barefoot through Canterbury and undertook many pilgrimages there to Thomas’s tomb.  In this document with Henry’s Great Seal he promises to protect the rights of the  monks at Canterbury in perpetuity – political back covering or genuine regret? 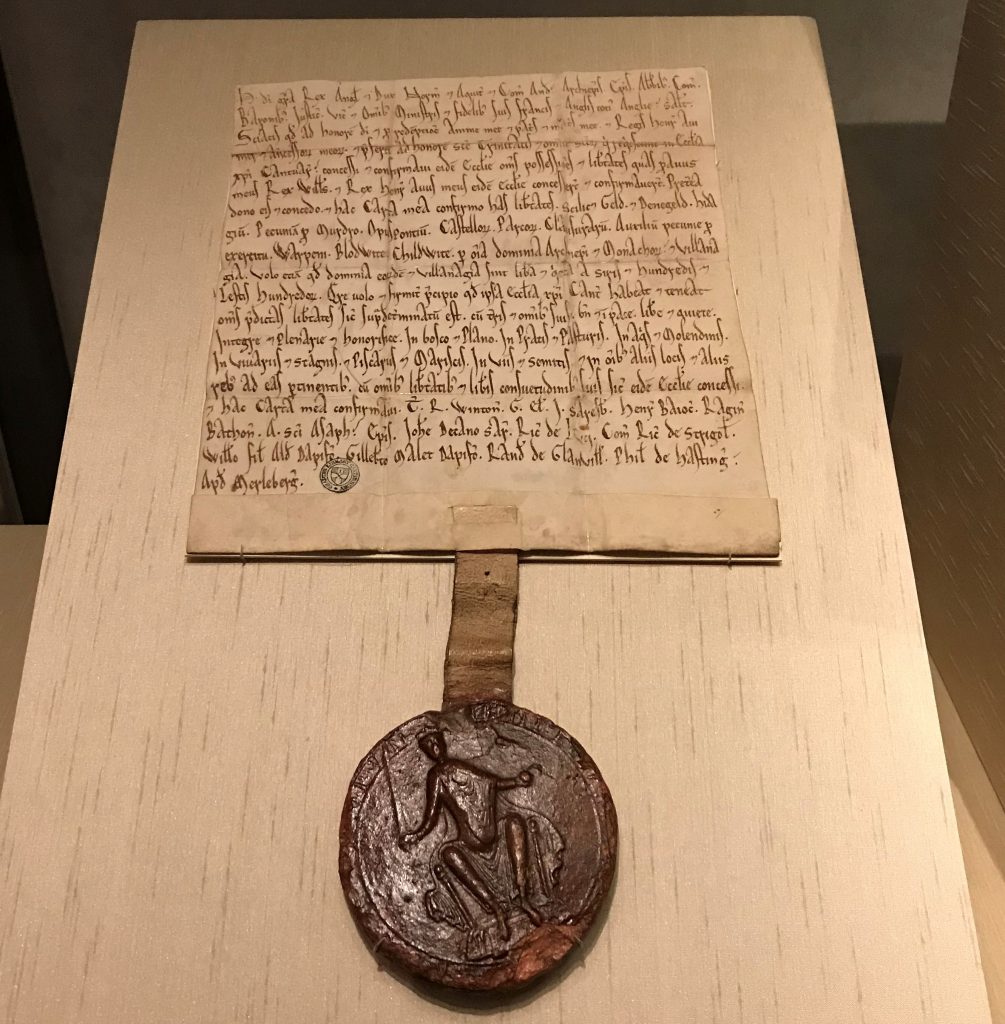 The undoubted highlight of the whole show is the Miracle Window, brought here for the exhibition from Canterbury Cathedral where it has survived somehow for 800 years .  These extraordinary Medieval glass wonders depict the stories of Becket’s miracles. It has never left the cathedral before and is displayed at eye level for a better view of its details. I have to say it is breath-taking. At its home in the cathedral  it’s hard to see properly as the window is 6 meters tall and the light does not fall though it as it does here.  The colours are so intense and it is impossible to believe that this precious window dates from ?.  The British Museum has taken each of the 4 portions of the window and set them side by side so you can really see the miracle stories being told. The information panels easily take you through each tale and the whole area is somewhere to linger.

Here are the windows in the cathedral, hard to see and rather dark. 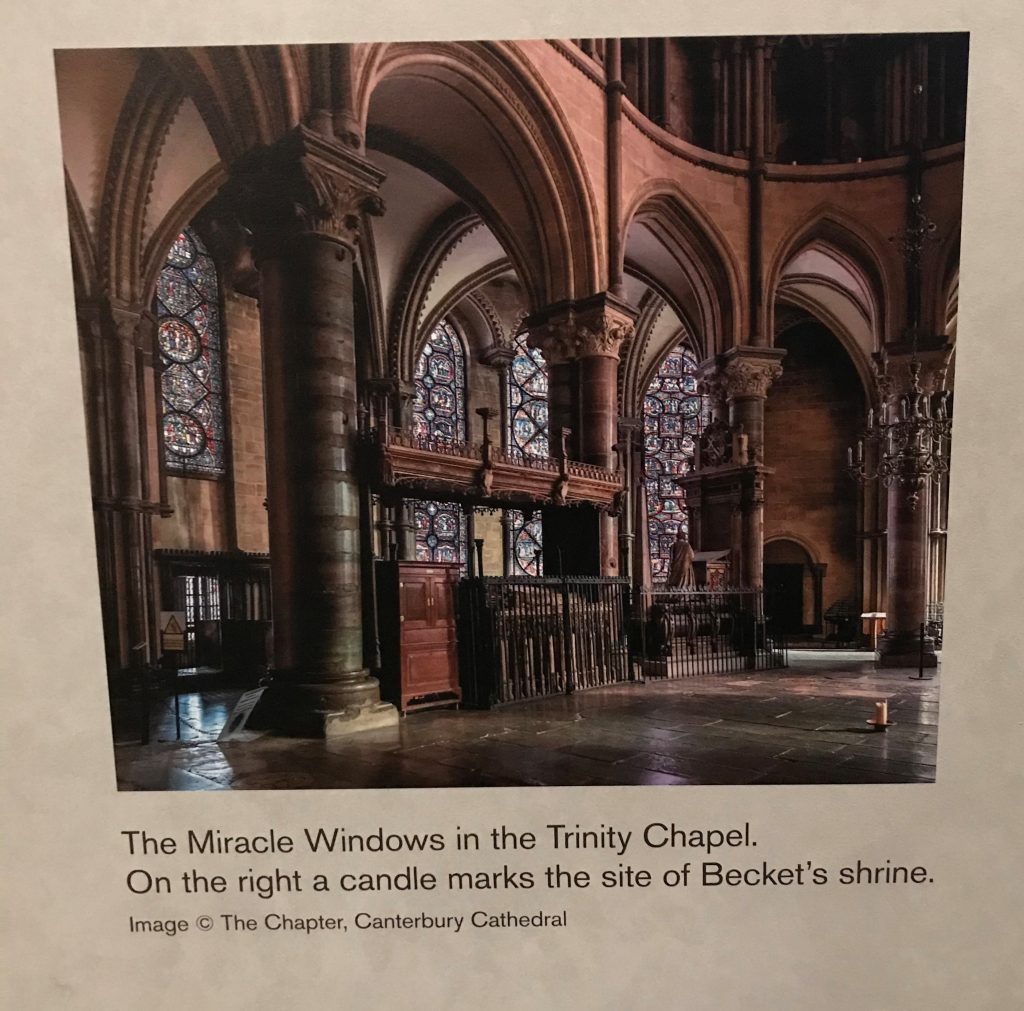 Here are a couple of photos to give you an idea of this splendid sight: 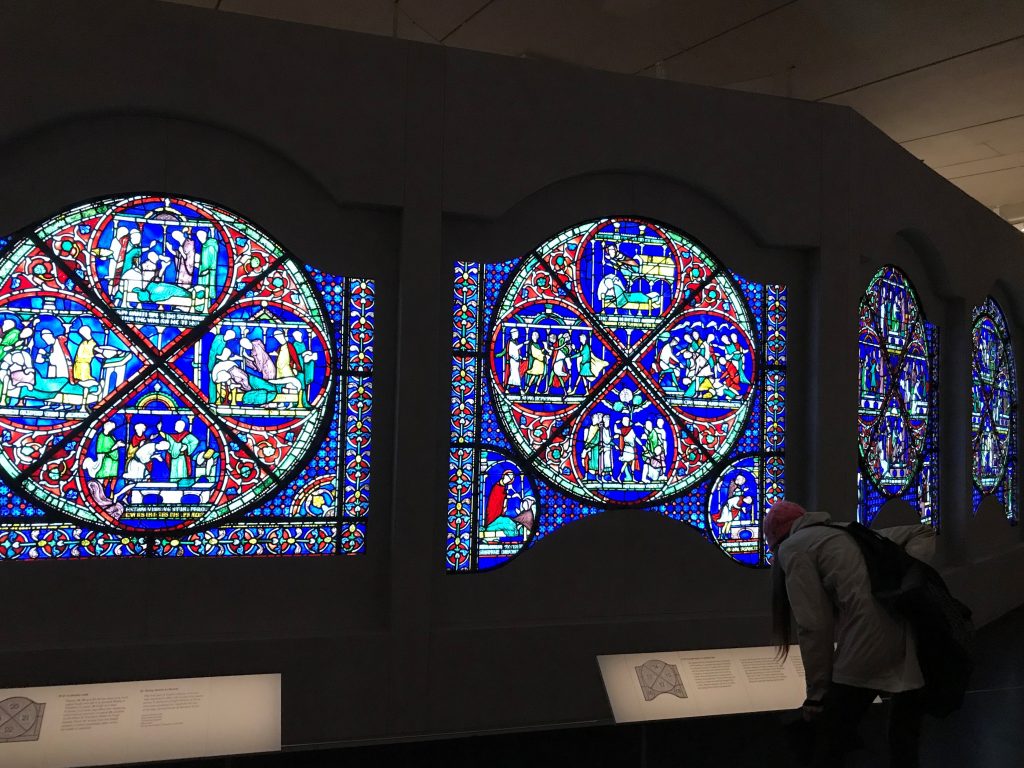 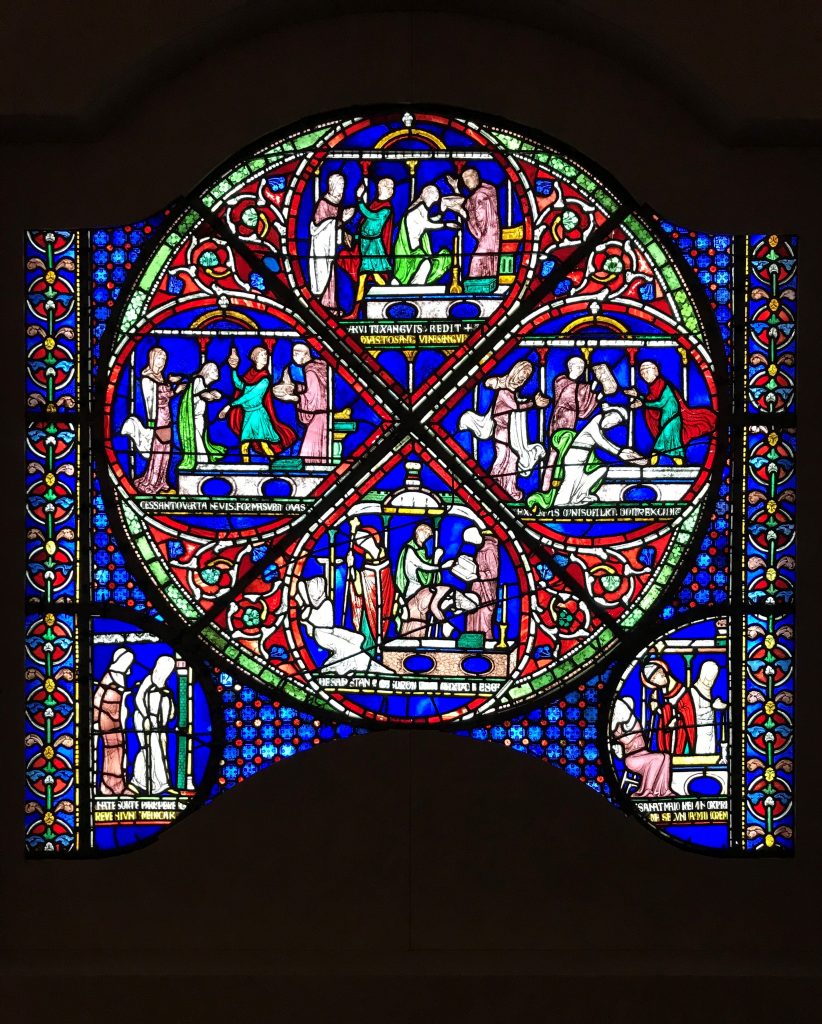 Looking closer at one miracle, you can see the wonderful story telling skills of the glass makers.   This small section shows Ralph de Longville being cured of leprosy,  On the left he sits by Becket’s tomb, his limbs which are covered in sore, are bathed with St Thomas’s Water  (Becket’s blood diluted) and he is offered some to drink.  At the top he leaves on his horse, cured and on the right he returns to the tomb to  give thanks.  Can you believe this glass dates from the early 1200s, it has of course been repaired over the centuries but the skill and beauty shine out. 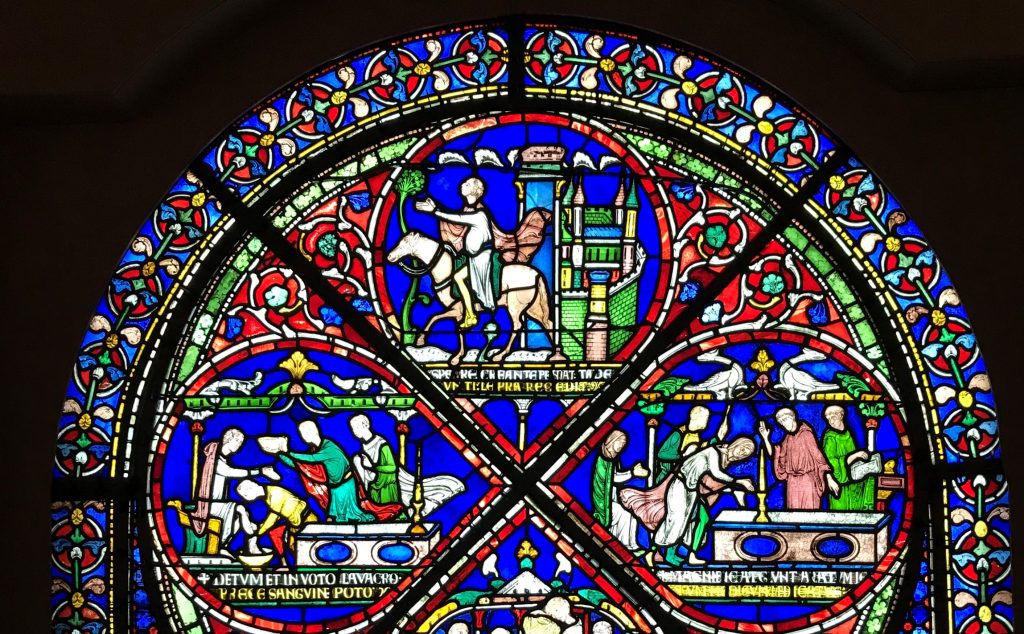 The final section of the exhibition which really caught my eye was the incredibly grand tomb built to house St Thomas in 1220.  The unveiling was quite the event with King Henry lll and European dignitaries in attendance.  It was a no expense spared moment with the fountains in Canterbury flowing with wine!  The tomb was destroyed by Henry Vlll in another king v church dispute but computer aided reconstruction using fragments and contemporary descriptions from the time give us a picture of the grandest tomb in Christendom.  This version is from approximately 1408. A short film gives us a 360 view and one with the cover aloft. 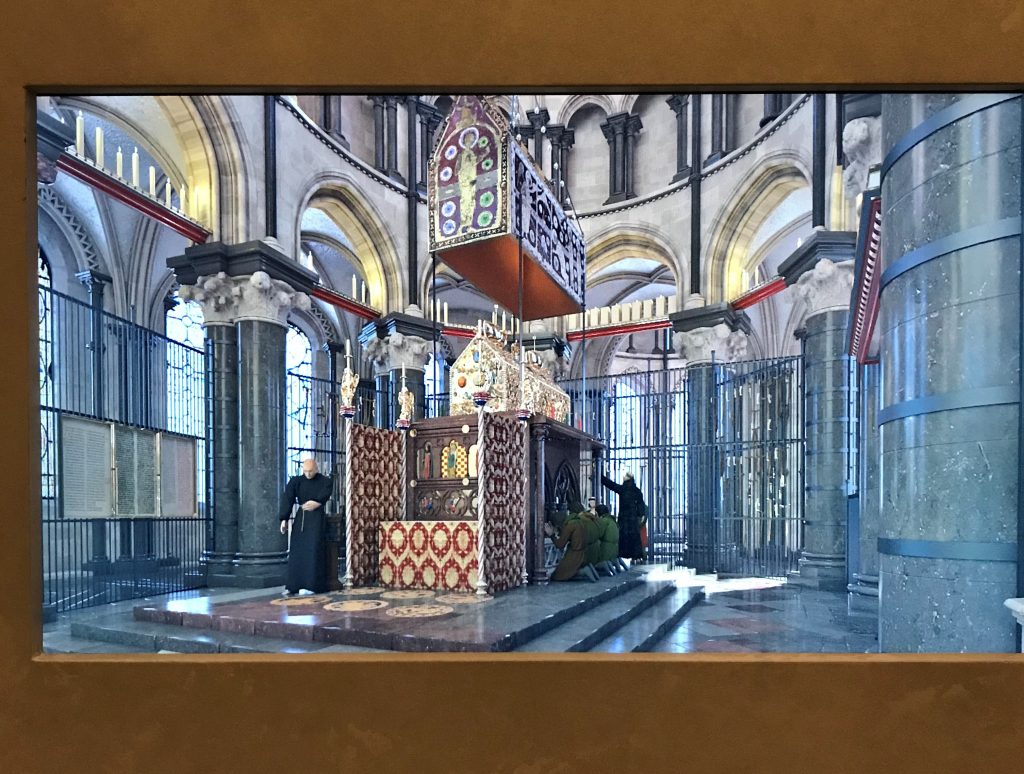 There is so much more in this exhibition, more information can be found about this and other exhibitions at the British Museum here.

Full disclosure: I was invited to the press preview by the museum but as a member I have revisited it since.