What a life! George King’s early life as a foundling held no clue of what was to come. This new exhibition at The Foundling Museum takes us through his adventures with letters, documents, items from the time  and art work.  Entitled ‘Fighting Talk: One man’s journey from abandonment to Trafalgar’ it takes us step by step through George’s life from 1787 to 1857.

An overlooked diary was found in a display case in the museum and on closer inspection it was a first hand account of the life of George King written in his own words and in his own hand. What a treasure trove this turned out to be.

George King was left at the Foundling Hospital at aged 5 months where he was numbered child 18,053, a shocking number showing the extent of extreme poverty in the 1790s when mothers surrendered their children because they could no longer care for them. His own mother was seduced and abandoned and left her baby who was given the name George after the king at the time. This sad document is her petition in 1787 to have him admitted because she was ‘friendless’ and ‘in extreme misery’ tho her application is supported by her local clergyman. Her name was Mary Miller tho George would never have known this.  It is shocking to learn that not all the needy children were admitted due to pressure of numbers and lots were drawn to decide. George’s mother drew the lucky white ball while the other children, whose mothers drew a black ball,  most likely died 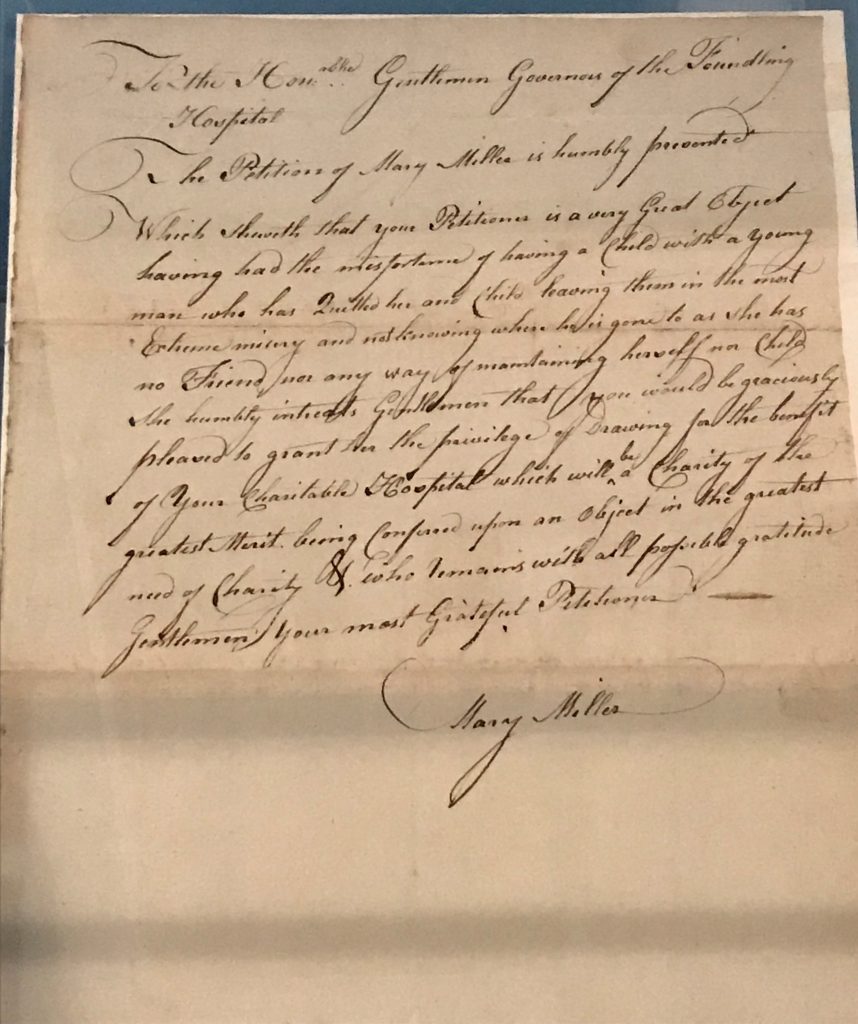 George was sent to  wet nurse in Hertfordshire and was well treated until her returned to the Foundling Hospital He was taught to read and write which was to stand him in good stead through his life and was an unusual skill for a working class child of the time. His schoolmaster Robert Atchison was highly influential in George’s life and is kindly remembered in his diary.

So how did he end up at the Battle of Trafalgar? At age 13 he left the hospital to become an apprentice to John Browne’s, a confectioner and grocer in the City of London.  Charity apprenticeships were common as employers were paid to provide board and lodging and train them to earn their living in lowly often dangerous jobs where they were badly treated.   George was bullied by fellow apprentices and ended up in fights.  To avoid the danger of prison after one particularly bad fight,in 1804  George runs away to Chatham to join the navy with indentures but was plied with drink and press ganged directly onto the HMS Polyphemus, a massive war ship.   Soon the Polyphemus joined up with Nelson’s fleet and entered the Battle of Trafalgar.  A dramatic painting dominates the main exhibition room marking this event. 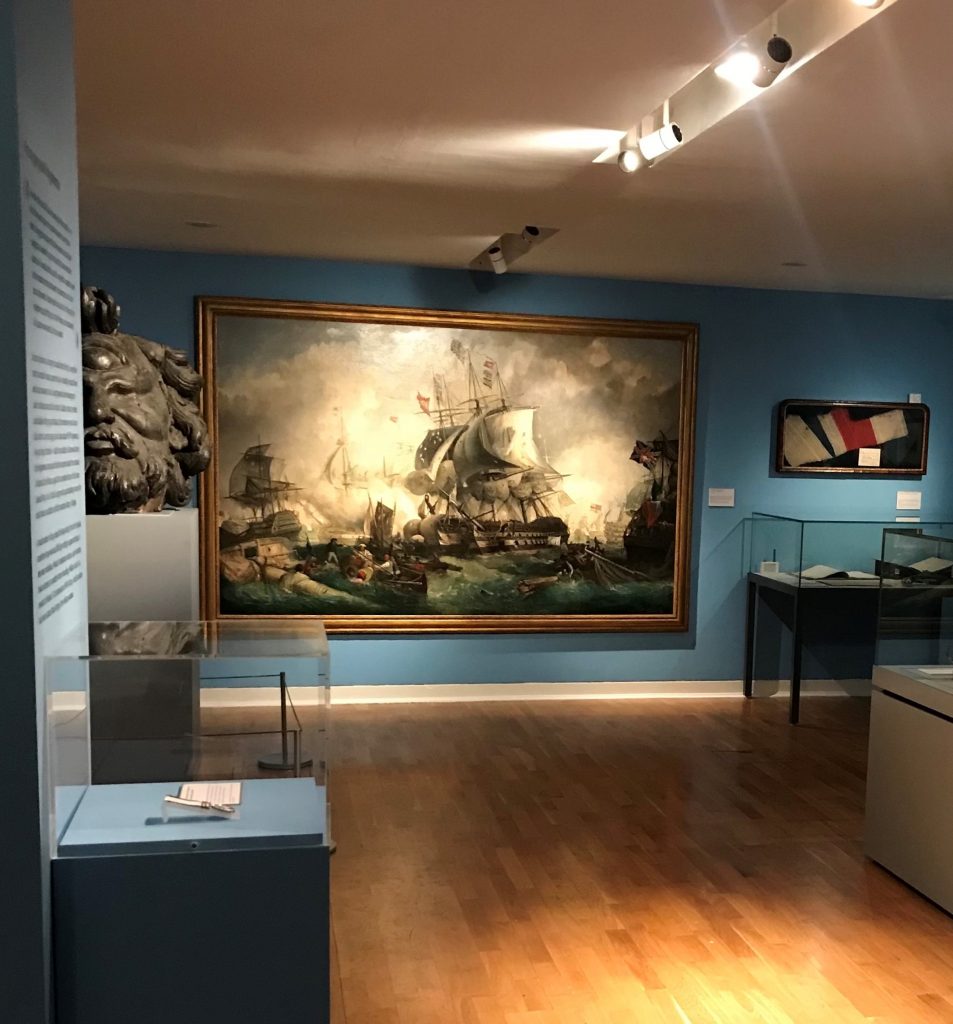 George recounts the chaos and danger of the battle and notes that ‘at half past nine Nelson made the signal the England expects every man will his duty… ‘  And they did!  Nelson of course was killed in action and HMS Polyphemus towed his ship VIctory into the safe port of Gibraltar.

One unexpected artifact is a fragment of the Union Flag from Victory which had been draped over Nelson’s coffin. Sailors pocketed scraps instead of folding it onto the coffin – apparently they were prone to taking things at public occasions! 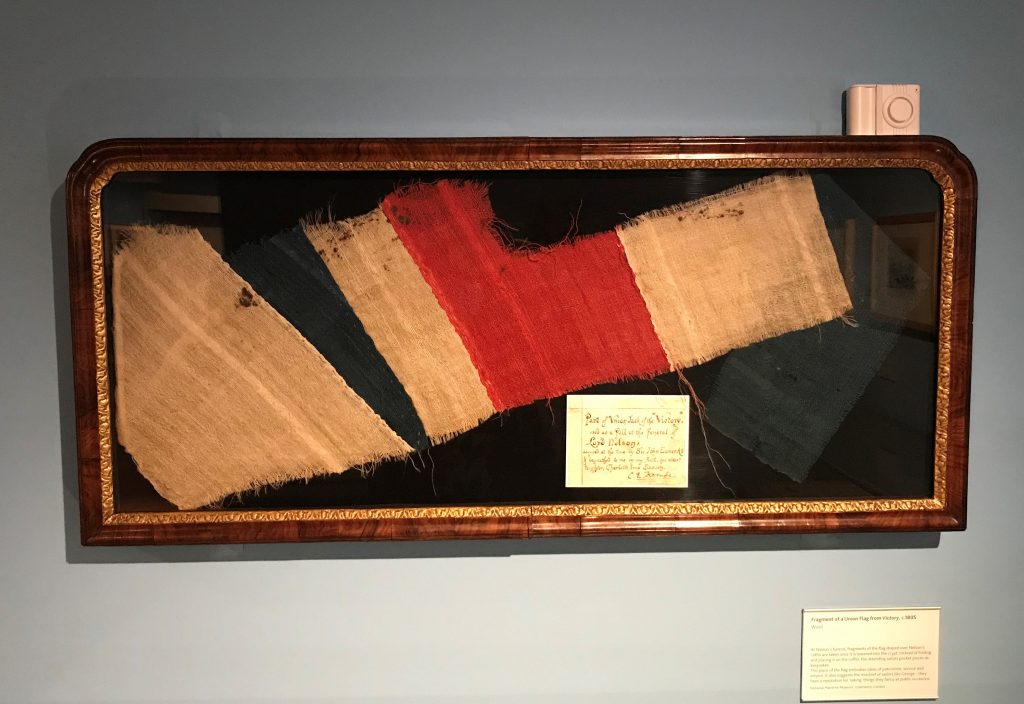 George stayed in the navy for 24 years and travelled the world but this hard life took a toll on his health.  This map shows his travels gives you some idea of the extent of his voyages to Africa, South America and the Caribbean. . 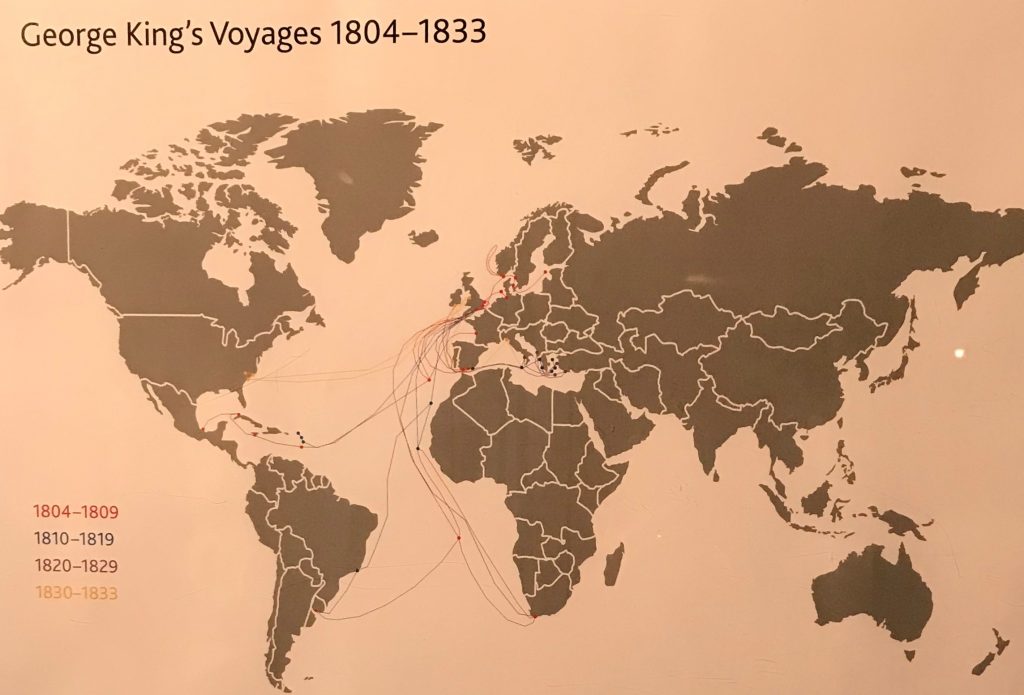 His health suffered from the work but also due to poor treatment.  He was drinking, perhaps to counter the horrors of war but also sailors were given wine before battle and the famous tot of rum was a daily norm, The drinking led to fights which were punished by lashes on many occasions.  He is recorded as having dysentery and having to be sent ashore in Malta in 1811.

He finds the time to marry in 1825 partly because ill health causes him to spend more time on shore but she dies while he is away at sea.  After 24 years in the navy he travelled to Charleston, in newly independent America and worked successfully as a teacher.  Despite being asked to stay on with a pay rise he left to return to England possibly finding his witnessing of slavery too hard to bear.  Back home in 1832, he tries various jobs such as dock work, hop picking and even being a policeman but he fell on hard times with no recourse to help but applied to get a place at the Royal Naval Hospital at Greenwich and he was successful and awarded a pension for life.

His writing skills helped him again and he secured a clerk’s position in the hospital, earning enough money to leave, get his own home and marry again.

George King died in 1857 aged 70 but he left us his diary which he called: Diary of the Incidents of the Life of the Undermentioned, for forty one years c1845 ‘ It was written when he was settled in Greenwich but it is thought he kept notes so he could write up the ‘incidents’ in great detail.  Here’s the book itself.  There is an excellent film which shows pages with sections read out which are interspersed with interviews giving useful background to George’s story. 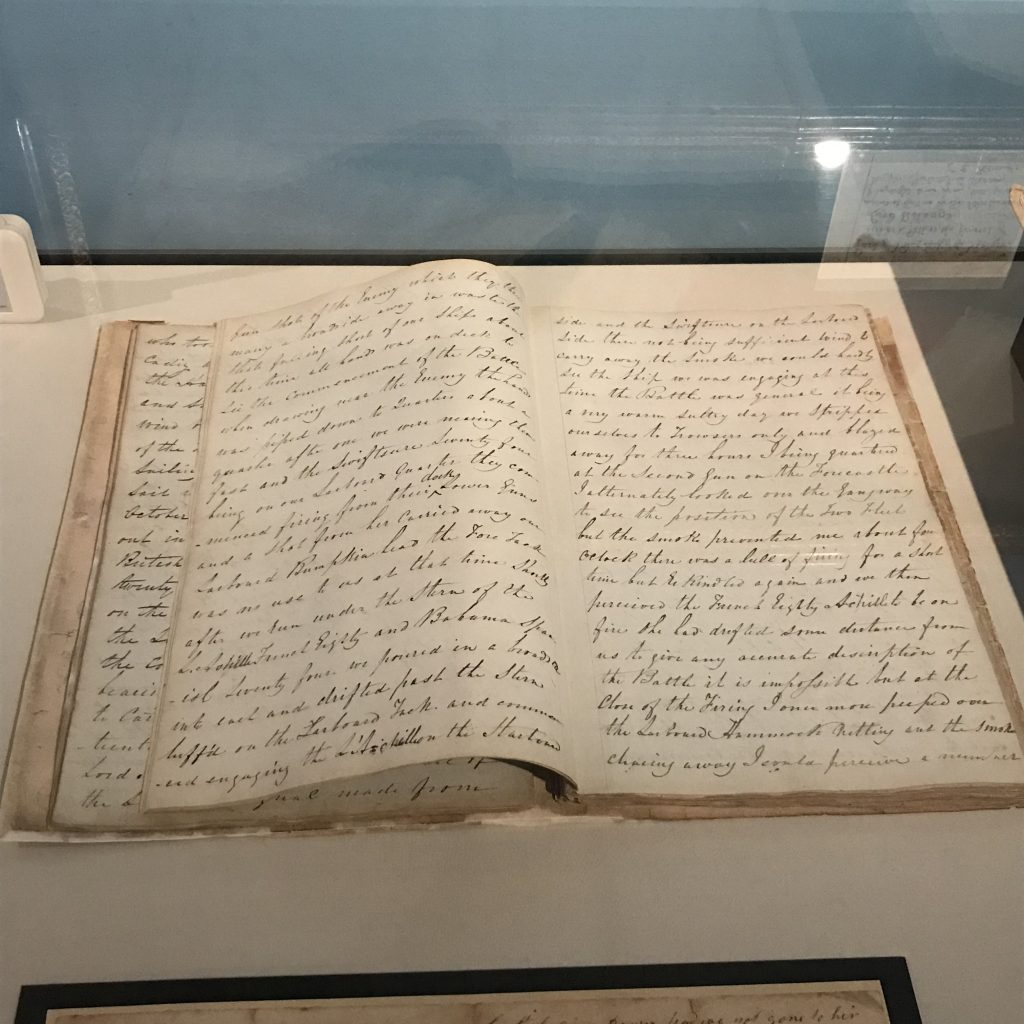 Back in uniform at the hospital it is fascinating to think of his life being dominated by uniforms from the foundling through the sailor to the pensioner. A case displays the pensioners’ uniform, the only surviving example, another special item in this exhibition. 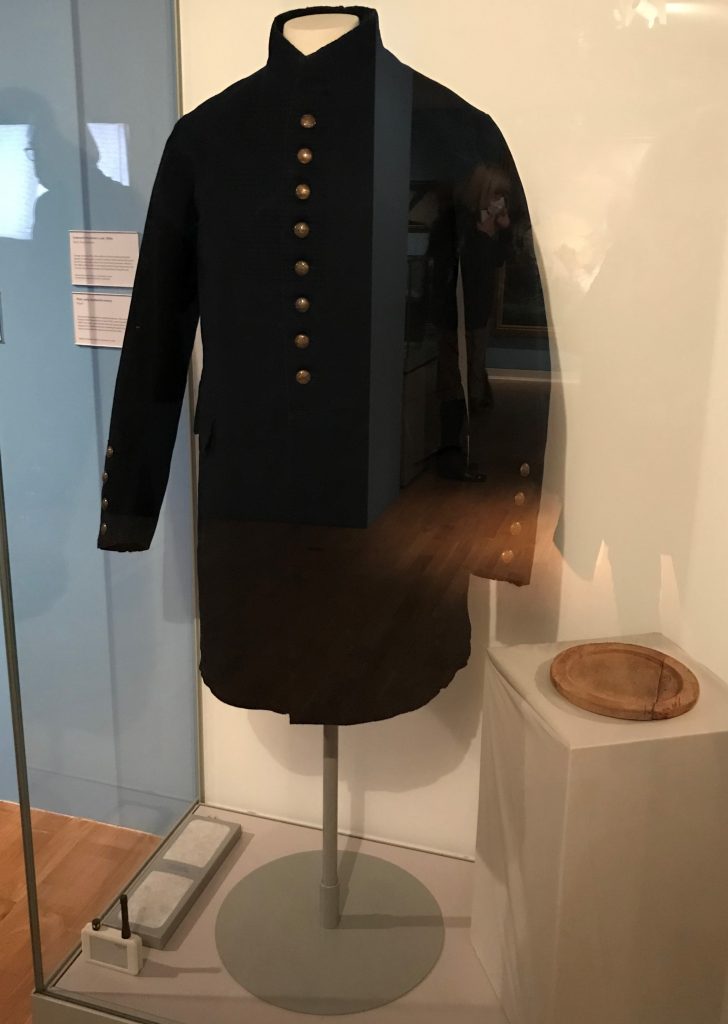 We were lucky on the preview visit to have a talk by Helen Berry whose book Orphans of Empire, The Fate of London’s Foundlings traces the lives of many foundlings and was a an external curator of this exhibition.  She stressed what a rare treasure George’s diary was because a foundling  boy was not usually taught to write as well as read.  His first hand account of life below decks on naval vessels showed the back breaking work the working class press ganged sailor put into the great victories of the era.

This is a small, well presented and fascinating exhibition.  George has left us a rich story and it is well overdue the telling.

For more information about the Foundling Museum, visiting times and costs their website is  https://foundlingmuseum.org.uk/ There is a lot more to see than this special exhibition!

Full disclosure: as is customary in the travel industry I was invited by the Foundling Museum to a preview of this exhibition.  This has not influenced my review.