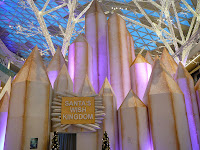 Christmas is most definitely coming and it’s time to get out and attack that present list. London is looking beautiful with all the lights and decorated shop windows, so I’ll be posting a couple of photos each week in December and you can see for yourselves. Even better, why not squeeze in a visit to London or plan to come next year? On the left is the huge Santa’s Grotto at the massive Westfield shopping centre – shopping heaven or shopping hell, up to you! On the right is a very 60s style Carnaby Street, naturally, where peace and love are the festive theme and very much in keeping with the street’s history as the centre of groovy London.

It was World Aids Day on Tuesday and London did its bit to raise awareness with gatherings, pop up shops for fund raising, church services and the most visible sign was the London Eye which turned itself red and was a really spectacular sight. We all stopped, stared, thought about the message and took our photos.

One of the big exhibitions in town at the moment is Moctezuma Aztec Ruler at the British Museum. You can see amazing artefacts from his rule and find out his story especially the momentous year following the Spanish landing through to the defeat of his empire. I loved the turquoise mask and serpent and thought the historical explanations well written. The British Museum is one of the most beautiful buildings in London both outside and inside. The photo on the left shows the classic exterior and the other is of the amazing covered court 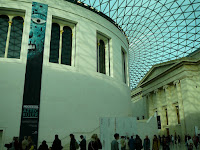 with the historic library in the curved central building. There is so much to see in the museum that it would take a whole blog to do it any justice but its newest exhibit is a few pieces from the recent Anglo Saxon find in Staffordshire. There are gold fixings from swords dating back to the 600s AD with beautiful workmanship and inlaid garnets. It’s incredible to think someone found the full hoard of over 1500 pieces laying in the ground just a few months ago. I’m returning to the British Museum next week so will report on more of its wonderful exhibits . 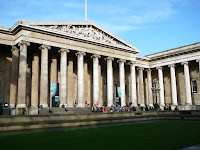 My restaurant of the week is Polpo, a Venetian wine bar on the edge of Soho near Carnaby Street. It’s a busy place and they don’t take advance bookings so we had a quick drink nearby before claiming our table. They have a tapas style approach and I recommend their pork belly with mushrooms and radicchio and the wonderful roast rosemary potatoes, washed down with a good strong red wine. We stayed on beyond the lunchtime rush and it was lovely as the afternoon light faded outside, it’s cosy with a casual dining area and seating at the bar on stools. It has that classic ‘distressed’ look and is hugely popular.

Bar of the week was in the Courthouse Hotel, which lives up to its name and has many of its original features including 3 former cells in the bar area which you can sit in (with the door open!) complete with the cell toilet but for decorative purposes only now. Oscar Wilde and Mick Jaggar spent some time here but before the cells became part of the bar sadly for them!

Must be off shopping for presents….